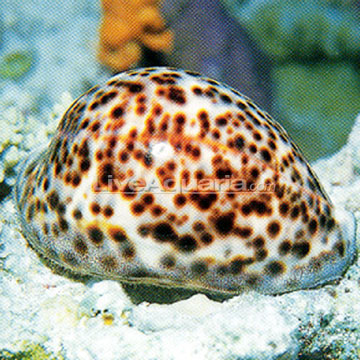 The Tiger Cowrie has an egg-shaped, spotted, glossy shell and is in high demand for the rock aquarium. It differs in color depending upon geographical location. While it does not have an operculum to shut when it retracts its mantle into its shell, the opening is lined with "threatening" tooth-like structures. Normally, the mantle will completely cover its shell unless it feels threatened. This helps it keep its lustrous white and brown mottled coloration, while its mantle will appear like a fingerprint of black and gray, with many short papillae over the surface.

In the wild, it can be found under rocks or resting on soft corals during the day, foraging for food mostly at night. The Tiger Cowrie prefers a rock aquarium with hiding places. While small, it will eat some algae and scavenge for scraps, but as an adult, it will eat some anemones, sponges, and soft corals, and is best housed with starfish, sea urchins, and tubeworms in the reef aquarium. Do not house it with Condylactis sp. It needs low nitrate levels and will not tolerate copper-based medications.

The diet of a large Tiger Cowrie should be supplemented with pieces of fish and mussel.

Write a Testimonial | Ask Customer Service
Glen H San Diego , CA
This guy is awesome. Very active at night. He moves all over the place. During the day he just sits there, but he's very beautiful and a good addition to your tank.
Tiffany D FL
I just purchased one of these guys and they are great! It was never on my list of "must haves" for my tank, but I must admit- what a cool critter! It is so different from anything else I have in my tank and a lot of people have never seen one! Definitely a must have. Even though it says caution for reef safe, it doesn't bother any of my corals. It does knock a few things out of the way and will plow right over hermits and other snails though.
1-2 of 2 testimonials