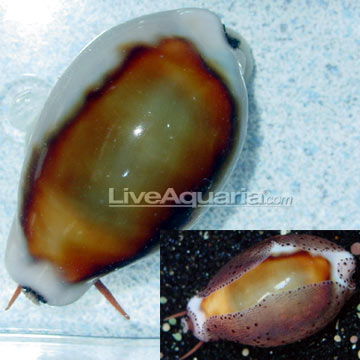 The Chestnut Cowrie is also referred to as the Date Cowrie with its egg-shaped shell colored orange, tan, brown and white. The opening in the shell has "teeth," which provides protection from predators. The mantle extends through this opening and completely covers the shell unless the snail feels threatened.

The Chestnut Cowrie is native to the deeper and colder ocean waters off the coast of California, from Monterey Bay south to central Baja California. This species of Cowrie is a temperate snail that prefers cooler water temperatures, especially by typical saltwater standards. Although they can tolerate water temperatures up to 72 degreases, they are best suited in temperate aquarium that replicate natural environmental conditions found in Southern California with water temperatures the mid-60°F range.

Provide the Chestnut Cowrie with ample hiding places and sufficient room. It is a nocturnal animal by nature; during the day it is found under rocks or resting on soft corals, and at night it forages for food. An aquarium with live rock provides a good environment where it can graze on algae and diatoms growing there. Although mainly herbivorous, when it becomes larger, it may try and feed on sponges and soft corals. If there is insufficient algae, its diet should be supplemented with dried seaweed, tablets, and flaked foods that are eaten off of the bottom.

It is extremely difficult to breed in captivity, and has no distinguishing characteristics to help differentiate it from its mate. It is very sensitive to high levels of copper-based medications and is rather intolerant of higher nitrate levels.

Write a Testimonial | Ask Customer Service
Timothy Ware Saint Louis , MO
We just received our Chestnut Cowrie today and I had no idea he would be so interesting to watch. He is very active in the reef and has already investigated the other snails and live rock. This snail is absolutely beautiful and highly recommended. Like all the specimens we have received from LiveAquaria he was in excellent condition.
Gene Boyer Flushing , MI
Put two of these in my temperate reef (67°), a few weeks ago. They are inactive during the day, but very active when the lights are out. Had a problem with algae in the sand, but not anymore. Great addition, solved my problem!
1-2 of 2 testimonials