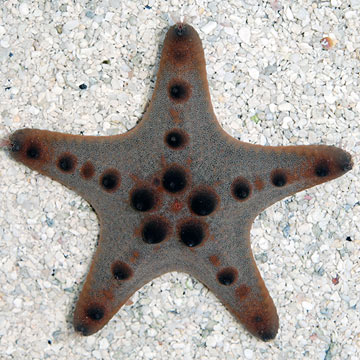 The Chocolate Chip Sea Star is a highly-recognizable ornamental sea star that boasts instant appeal. It is not difficult to imagine the dark chocolate brown tubercles (protrusions) that dot the surface of the sea star as chocolate chips on top of a tasty cookie. While it may seem odd to consider a sea star "cute," the charming color pattern reminiscent of the classic baked treat makes the Chocolate Chip Sea Star a highly desirable addition to a FOWLR (Fish Only With Live Rock) aquarium.

The drip acclimation method is highly recommended for all Sea Stars since they are unable to tolerate rapid changes in water chemistry (oxygen levels, salinity and pH). The Chocolate Chip Sea Star should never be exposed to air while handling. Also, the Chocolate Chip Sea Star must not be exposed to any copper-based medications and avoid contact with a majority of anti-parasitic medications.

In the aquarium, the diet the Chocolate Chip Sea Star can consist of chopped clams, shrimp, and squid.

Write a Testimonial | Ask Customer Service
Ben S Wilmington , DE
good invert. stay on wall all day
Patrick Howell Phildealphia , PA
i have chocolate chip star in my reef tank with soft corals and a clam yet the clam is way bigger than the star my snails pester my soft corals more than anything my star just goes around the sand all day.
1-2 of 2 testimonials