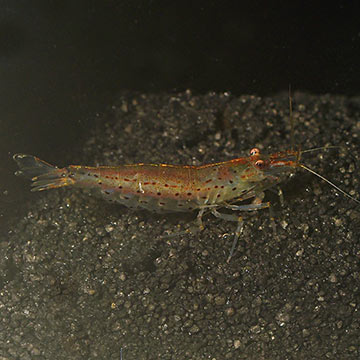 The Japonica Amano Shrimp, or Amano Shrimp, has gained popularity due to its large appetite for all kinds of freshwater algae. It will consume leftover fish food and detritus on the aquarium floor, making the Amano Shrimp an efficient cleaner that is also very interesting to watch. The Amano Shrimp is mostly opaque brown in color with a tan stripe that runs the length of the back. On their sides, there are many broken horizontal lines.

The Amano Shrimp is also known as the Yamato Numa-Ebi, or Japanese Swamp Shrimp and it originates from the swamps of Japan. The ideal setup for the Amano Shrimp is an established freshwater aquarium or pond of at least 10 gallons with plenty of hiding places and algae with a mature substrate. The Amano Shrimp should be housed with small peaceful fish or koi that will not pose the threat of eating it. The Amano Shrimp can tolerate low to moderate salinity levels, making them an ideal algae controller for ponds and water gardens in non-freezing climates.

The Amano Shrimp is very difficult to breed, and very few hobbyists have been able to raise the larvae to maturity. The average life span of the Japonica Amano Shrimp is 2 to 3 years in captivity.

Japonica Amano Shrimp is an omnivore that will consume algae, detritus and left over food. If insufficient food is present, supplement with a quality flake food or pellet.

Write a Testimonial | Ask Customer Service
Crystal City Not Selected , TN
I love these guys. I have a planted aquarium and they run around eating algae all day. I would definitely recommend these to anyone with an established tank.
Dave IN
Awesome shrimp - they'll eat ANYTHING! I've got them in a planted tank as well, and I've even caught them nibbling on dead leaves!
Adrienne W Mesa , AZ
I just ordered 4 Amano Shrimp from LiveAquaria and I am very pleased to see that these are true Amano Shrimp. I had previously gotten what was supposed to be Amano Shrimp from a local pet store and they were clear in the store but then they all turned to a dark reddish/brown color the next day. I still like them but am happy to now have some real Amano shrimp as well. It's difficult to find them as I have a lot of hiding places in my 55 gallon planted tank but when I do see them they always look to be busy eating. They are very interesting to watch and I have been surprised to see how close they get to the other fish in the tank. They don't seem to be too scared of the fish and the fish seem to ignore them. I have them in a tank with Siamese Algae Eaters, Cherry Barbs, Cardinal Tetras, and Otocinclus catfish.
Kelly L Houston , TX
I love these shrimp. They are efficient clean up crew members of any community tank. They are fun to watch, mine actually did breed and kept my tank stocked for years.
Josh R New Hyde Park , NY
Amano shrimp are my favorite thing to watch in my aquarium. They will explore to every inch of the tank scavenging. They will literally eat anything; flakes, worms, algae, dead fish, everything. They get quite large compared to other shrimps and use it to their advantage to hog food. I've had one pick up a whole algae wafer and take it back to his lair. They are really cool to look at and great cleaners. They also get super frisky and you may see females constantly berried although the babies need brackish water to survive. Highly Recommend them though.
1-5 of 5 testimonials