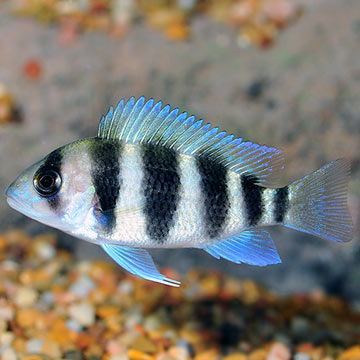 The Frontosa African Cichlid is a fairly typical member of the Cichlidae family. Both sexes are characterized by a large frontal hump which will develop as the fish reaches maturity, or attains a length of around 4 inches.  It is known by the scientific name of Cyphotilapia frontosa, but may also be known as Paratilapia frontosa, and Pelmatochromis frontosus. Originating from the deep waters of Lake Tanganyika, Africa, wild-caught specimens are not seen as often as captive-bred specimens in the hobbyist's aquarium. In their native Africa, Frontosa African Cichlids are considered a delicacy on the table.

Although territorial, the Frontosa African Cichlid is generally not aggressive, but rather gentle and tolerant. It does well in a tank with plenty of rocks and caves for hiding and a sandy bottom. Plants are incidental but may be helpful for other tank mates.

A mouth brooder, eggs are laid in a rocky crevasse or cave and then scooped up by the female where she carries them for 21 to 28 days. Once released, she will take them back into her mouth at night or if danger is present. Most members of the mouth brooding variety of African Cichlids are easily bred while in the aquarium if given the proper tank set-up and excellent water conditions. A small group of 5 to 7 females and one male will provide the best opportunities for breeding.

The Frontosa African Cichlid prefers a diet of flaked and pellet foods and freeze-dried ocean plankton or krill.

Write a Testimonial | Ask Customer Service
Doug T Melbourne , FL
My all time favorite African Cichlid, the Frontosa are majestic yet peaceful when kept in the proper environment. They are stunning to look at and the different variants keep even the most experienced hobbyist entertained. From tiny fry to aquarium giants, these fish are a joy to raise. The beautiful hump, different shades of blue, and the long trailing fins of an adult will take your breath away. Who needs saltwater fish with these beauties available!
1-1 of 1 testimonials