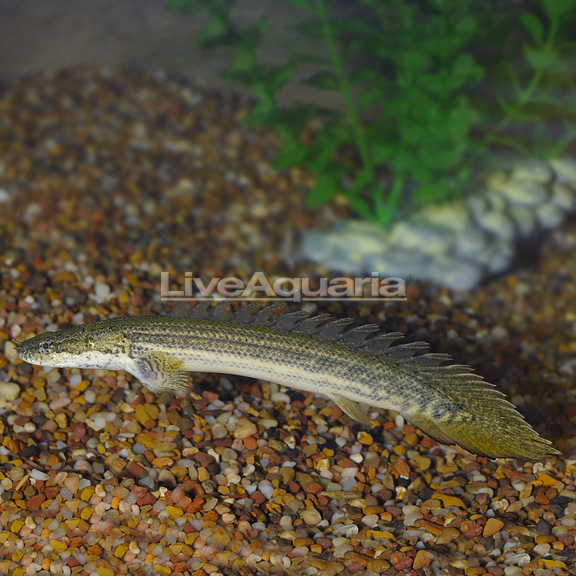 The Lapradei Bichir, Polypterus lapradei is a lobe-finned Pike originating from Africa. With an elongated eel-like body that is highly colored, it has a striking appearance. Its body displays a yellow and gray checkered pattern with dark gray horizontal striations running along its body. Noticeable spiked rays on its dorsal fin add a feathery appearance to this freshwater fish. Due to its physical attributes, it is a must have species for some Bichir collectors.

As with other members of the primitive?Polypteridae?family, they have the unique ability to survive out of water. With a lung-like paired swim bladder and gills to help breathing, this fish can spend short periods of time on land but must soon return to its water environment for adequate respiration. It has a tapered blunt head with a lower jaw that protrudes further than its upper jaw.

This Bichir does best in a large "oddball" freshwater aquarium, densely planted with numerous hiding places, plenty of area to swim, and a sandy bottom. Growing as large as 29”, it requires an aquarium of 180 gallons or more. This species is semi-aggressive in the fact that they will swallow any fish or invertebrate that they can fit into their mouth, but they are passive towards other large fish. However, they are aggressive towards their own kind, and only one should be incorporated into an aquarium, unless the aquarium is very large. Prone to jumping, a tight, well-sealed aquarium lid is required.

Eggs are deposited on clumps of vegetation; however, breeding in the hobbyist's aquarium setting is not common.

A carnivore, Polypterus lapradei can be offered a varied diet of live foods such as worms and shrimp, as well as pellets. It may also accept some frozen foods.