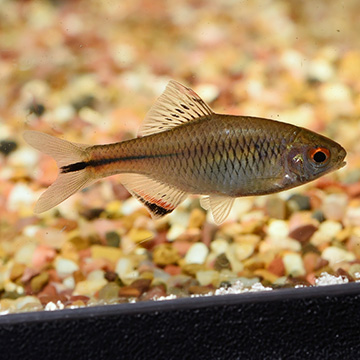 The ideal aquarium setup is at least 30 gallons in size, aquascaped liberally with plants (either real or plastic), rocks with plenty of hiding places, and gravel or sand for a substrate. Taiwanese Bitterling are shoaling fish that enjoy being kept in groups of 6 or more individuals. High water quality is essential and the addition of a powerhead to increase water flow/movement will also be appreciated. Being native to subtropical regions, the Taiwanese Bitterling can tolerate cooler water temperatures much like goldfish and other members of the Cyprinidae Family.

Bitterlings are popular additions for ponds with larger koi. They will feed upon parasites that infect the koi, especially anchor worms. Bitterlings are very active fish that will also feed upon insect larvae and will help in controlling mosquitos in the water garden.

Bitterlings are known to spawn into the mantle of freshwater clams, where they will incubate. If interested in breeding Bitterlings, keep a minimum of six individuals in the same aquarium to allow them to pair off. After the fry become waterborne, feed them newly hatched brine shrimp until large enough to accept other foods.

Offer the Taiwanese Bitterling a variety of foods including vegetables as well as meaty foods. Feed a quality flake food and micro pellets as well as freeze dried, live, and frozen foods such as brine shrimp and bloodworms.