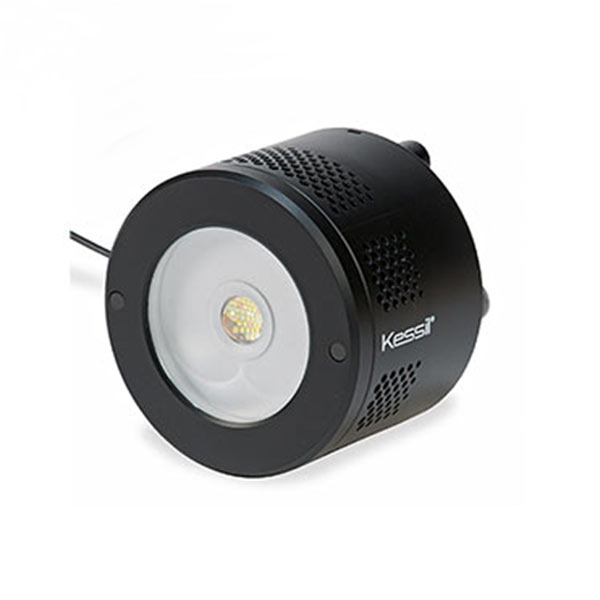 Color Mixing
Different wavelengths within a single LED array are seamlessly blended before leaving the light, emitting a uniform color with widespread coverage.

Tunable
Tune the spectrum and intensity for a personalized look. Kessil Logic™ maintains consistent output across the spectrum. 6,000°- 9,000°K.

Controllable
Compatible with 0-10V external controllers. Use the A-Series Spectral Controller for convenient control or the Control Cable-Type 1. Daisy-chain multiple lights using the Kessil Link Cable for seamless control from a single source.

*The A160WE may also be hung by mounting two metal hooks (diameters at least 2.5mm and thread numbers of at least six) through its brackets.
**The A160WE should only be installed on wood, acoustic tile or other similar materials.
**For sufficient airflow, the Venting Holes should be at least 12 inches from surrounding obstructions.

*The A360WE may also be hung by mounting two metal hooks (diameters at least 2.5mm and thread numbers of at least six) through its brackets.
**The A360WE should only be installed on wood, acoustic tile or other similar materials.
**For sufficient airflow, the Venting Holes should be at least 12 inches from surrounding obstructions.

Controllability
Multiple A160WE and A360WE lights can be controlled manually or by a single, external 0-10V Controller.

Starting a Chain
Connect two or more lights with the Kessil Link Cable. Should a longer cable be needed, the Kessil Extension Link may be used.

Control Methods
There are two ways to control a chain of lights:

Each light has its own independent power supply. Any number of lights can be daisy chained together without degradation of signal. However, in longer chains, a slight delay in response may occur. Manual tuning is disabled when device senses an Input Cable.

About Kessil
Professional Company, Superior Product
As a business division of DiCon, Kessil inherits a vast understanding of light and fundamental business philosophy. For a quarter of a century, the parent company has specialized in making products that direct high-speed laser beams into miniscule, hair size fiber optic cables for the telecom, defense/military, and biomedical sectors. In the early 2000's, DiCon realized the transition to LEDs was imminent and invested heavily in the technology.

As a result, two more business units were created: DiCon LED pushes the forefront of this movement with its proprietary high density LED array, and DiCon Lighting applies the platform in lighting fixtures for the architectural and entertainment industries. Today, each of DiCon's business divisions are recognized leaders in their respective fields, designing and manufacturing quality products with differentiating technology, advancing photonics knowledge through continuous research, and building customer relations with consistently first-rate service.

Kessil has assembled a team of product designers, plant biologists, and illumination engineers, all experts in their field of study, to produce a plant light that is distinctly different from everyone else's. With a careful consideration in the mechanical, electrical, thermal, and optical aspects of the product, it's smaller, smarter, cooler, and brighter. Kessil grow lights are not just the best in the class, it's in a completely separate class altogether. Kessil's own internal LED capacity allows them to make special wavelengths on their patented LED platform. Kessil is also able to innovate quickly with their vertically integrated capabilities. The transition from design to execution is seamless. The entire flow is 100% under Kessil's control. All their findings are speedily implemented into their products. Kessil will always be miles ahead of their competition with the best products and most advanced spectrum formulas.

Where Are They Now?
Today Kessil is an established business unit of DiCon with various successful product lines. The three founding members continue to drive Kessil with the same passion and excitement as they continue to make advancements in plant and aquarium lighting.

Kessil is confident that you will find their business approach refreshing and products superior. Come experience Kessil for yourself and see your plants bloom and corals pop under Kessil LED lights.

Kessil Dense Matrix LED Technology
LEDs were first introduced in 1962, used originally as indicator lights. Although light output has increased significantly in recent years (especially with the introduction of 1W LEDs), basic packaging method remains largely unchanged. Industry standard still assembles one LED chip at a time: one LED die is placed in a reflective cavity, bonded to two electrical contacts, and then sealed by an epoxy or plastic lens. This approach is simple, cost effective, and adequate for most general illumination purposes.

Following the trend of replacing traditional light bulbs with LED technology, new companies have started to appear in the horticulture industry, procuring single chip LED cells often from the same usual sources. They assemble the LEDs using similar approaches for general illumination by sparsely populating single LED chips over sheet metal, then securing them in a box to hang over plants. This "next generation" LED grow light sports mostly red and blue chips to promote photosynthesis. However, feedback from majority of growers shows that although the newer LEDs look brighter than previous generations, the depth penetration of the light is still insufficient compared with traditional bulb type grow lights.

Kessil, on the other hand, takes a completely different approach. Instead of individually wrapped LED chips, Kessil applies a brand new platform that densely packs many of them together. For example, the H150 grow light uses a dense matrix platform that carries 21 LED chips in a circle smaller than a dime! This patented design is the result of over 30 million dollars in investments and five years of diligent research by DiCon. Its team of Ph.D's found a way to fundamentally resolve the thermal issue and invented a metal carrier that dissipates heat away from the core quickly.

With this advanced innovation, Kessil is able to design a product that can operate at high currents and put out more light that can be effectively focused into intense beams, while still running at a device temperature much cooler than other grow lights. Through this patented platform, Kessil easily conquered the two biggest challenges in designing LED fixtures, beam control and heat management, to produce a grow light that not only penetrates plants deeply, but also runs cool at higher efficiency with a longer lifetime.

You may wonder what the advantage is in having a grow light that shoots intense beams. Consider a simple analogy using two different nozzles mounted on the same garden hose. One sprinkles water out of many tiny pores from the sunflower-type nozzle. In contrast, consider now a single jet of water from an industrial pistol nozzle. The sprinkler merely mists the surface of the plants while the steady stream from a nozzle cuts straight down to the soil. Although the amount of water is the same for both hose heads, the nozzle is drastically more effective in reaching plant roots.

Let's apply the garden hose example to understand how DiCon's LEDs can produce much better results. Imagine the water as light. The typical LED light has tiny chips spread over a wide area similar to the individual holes that water trickles through on the left picture with the sunflower nozzle, and puts out equally weak light. Conversely, DiCon's light has many LED chips densely grouped together to send out an intense beam that behaves like the jet stream shooting out of the pistol nozzle. Instead of sprinkling misty light onto the plant's surface layer, Kessil is able to inject light straight down to allow photosynthesis to also happen in the plant's lower tiers.