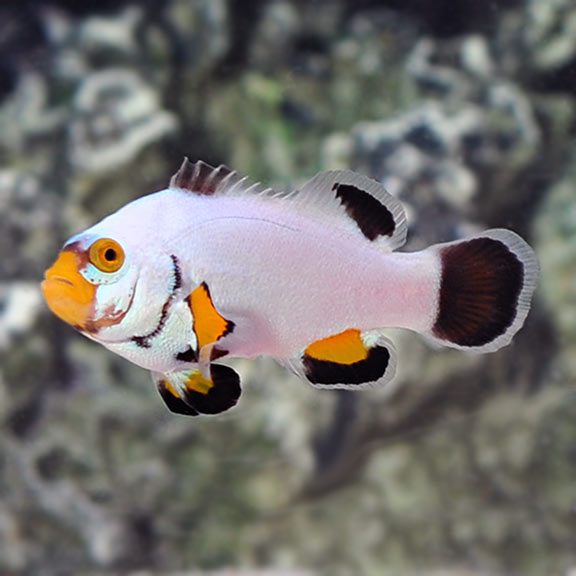 You've never seen a captive-bred clownfish like this before! The Platinum Percula is a magnificent white variation of the Percula Clownfish. developed the Platinum Percula through years of selectively breeding their famous Picasso Clownfish. These striking fish do not exhibit any of the original striping characteristic of the species. Instead, they are typically continuously white from head to tail. As Platinums mature, they will develop beautiful black fins that really stand out against the white body and orange face.

Amphiprion percula is the essence of beauty. However, it is the famous symbiotic relationship the Percula Clownfish has with various anemones that truly captures the imagination of most aquarists. In the wild, Percula Clownfish are commonly associated with anemones such as Heteractis magnifica or Stichodactyla mertensii.

Native to reefs across Oceania, the Indo-Pacific, and off the coast of Australia, the Percula Clownfish is also known as the Clown Anemonefish. In the wild, this member of the Pomacentridae family grows to about 4-1/2 inches; however, captive specimens rarely exceed 3 inches in length. In the home aquarium, the Percula Clownfish requires an aquarium of at least 20 gallons with a fair amount of live rock.

The Captive-Bred Platinum Clownfish is easy to breed in the home aquarium. The females will be the largest of the pair and the two fish will usually stay close to each other in the aquarium. Clownfish are egg layers and will deposit the eggs on a flat surface and defend the eggs from other tank mates. The eggs will normally hatch in 8-11 days depending on the water temperature. The fry must be reared in a separate aquarium on a diet of rotifers followed by baby brine shrimp.

Proaquatix is a top rated wholesaler of captive-bred Clownfish and other marine ornamentals, providing the highest quality graded fish to suppliers since 2001. Because they have their own grow-out facility, Proaquatix can hand-pick their breed stock to select the most beautiful and healthy specimens from the thousands of fish they have in production.

By providing an alternative to wild-caught fish, Proaquatix is helping to reduce human impact on ocean reef ecosystems, thus supporting reef conservation and the future of marine aquarium keeping.

Write a Testimonial | Ask Customer Service
Jerel Smith Brooklyn , NY
Got this little guy earlier this week and Have to say can't keep my eyes off him. Acclimated the first day with the tank mates in my 75 gallon. He loves to race across the tank with my other percula. They love hanging out!!!. Would recommend live aquaria to anyone that wants the best of the best......
1-1 of 1 testimonials