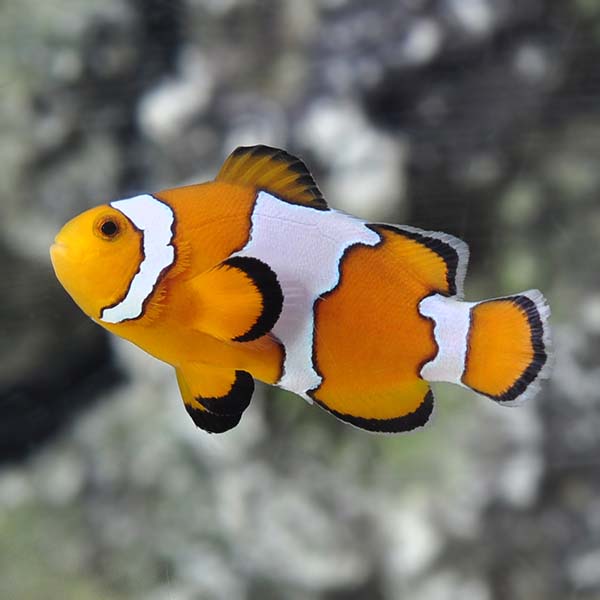 According to ORA®, this popular Captive-Bred Snowflake Clownfish was originally produced by Tropical Marine Centre in the UK around 1999. Only around 100 of these fish were ever exported to the United States, making the F1 Snowflake broodstock direct from TMC very uncommon. ORA obtained its first pair of F1 Snowflakes in 2005 and have been working on developing a hardier and more colorful strain of this beautiful clownfish ever since.

Snowflake Clownfish are popular variants of A. ocellaris that have a considerable amount of irregular white markings on the body. The edges of the white coloration will typically be jagged and angular. Each Snowflake is evaluated by an experienced grader for the percentage of white and the attractiveness of the striping. Just as their name implies -- no two are alike!

This member of the Pomacentridae family is an excellent addition to almost any saltwater aquarium system. Captive-bred fish have a unique advantage over wild-harvested species, as they are generally very hardy and more accustomed to conditions found in the home aquarium. Therefore, captive-bred fishes make a great choice for novices and seasoned aquarists alike.

The Captive-Bred Snowflake Clownfish from ORA is easy to breed in the home aquarium. The females will be the largest of the pair and the two fish will usually stay close to each other in the aquarium. Clownfish are egg layers and will deposit the eggs on a flat surface and defend the eggs from other tank mates. The eggs will normally hatch in 8-11 days depending on the water temperature. The fry must be reared in a separate aquarium on a diet of rotifers followed by baby brine shrimp.