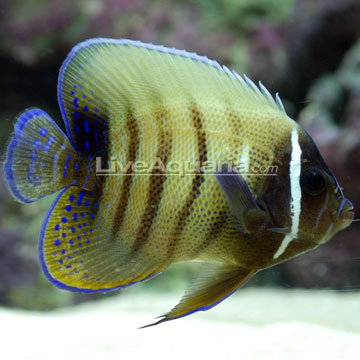 The Six Bar Angelfish is known by divers and aquarists to grunt in warning when approached.

The Six Bar Angelfish are hermaphroditic, difficult to breed, and indistinguishable in color from male to female. It is a large fish and requires a 220 gallon or larger tank with many hiding places; large amounts of live rock will also help create a good environment. Not a good reef dweller, the Six Bar Angelfish is prone to nip at stony and soft corals (sessile invertebrates) and clam mantles.

The diet of the Six Bar Angelfish should include Spirulina, marine algae, high-quality angelfish preparations, mysis or frozen shrimp, and other meaty items. It should be fed at least three times a day.