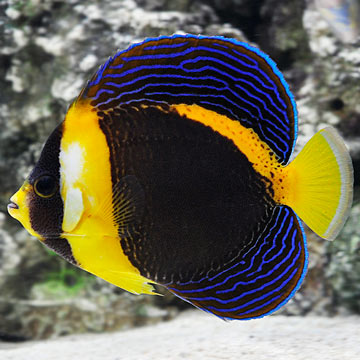 The Scribbled Angelfish, also known as Duboulay's Angelfish, is a favorite among aquarists and relatively easy to keep. The lips are a dull yellow while the face and body are predominately a dark blue-black. Separating the head from the body is a wide vertical band of yellow and white. A yellow stripe adorns the upper body and the caudal fin is also yellow. The Scribbled Angelfish derives its name from the many scrawls over the body and large dorsal and anal fins. Usually indistinguishable in color variations from male to female, the Scribbled Angelfish male may exhibit a small white patch on the gill cover.

The Scribbled Angelfish requires a large area to swim, so it needs a 180 gallon or larger aquarium with many hiding places and live rock for grazing. Not a good candidate for a reef tank, the Scribbled Angelfish is prone to nip at stony and soft corals (sessile invertebrates) and clam mantles. It may be shy at first and should not be placed with aggressive tank mates. Once acclimated, however, it may become more aggressive.

A member of the Pomacanthidae family, the Scribbled Angel is hermaphroditic and difficult to breed in an aquarium.

The diet for the Scribbled Angelfish should consist of Spirulina, marine algae, mysis or frozen shrimp, and other meaty items.

Write a Testimonial | Ask Customer Service
Anonymous MA
These fish are beautiful, sturdy, and well-behaved. I received mine from Diver's den and she was in perfect condition
Dan D Blue Point , NY
ONE OF THE BEST ANGELFISH SPECIES TO HAVE.I HAVE A PAIR RIGHT NOW.ALWAYS OUT SWIMMING AND EAT EVERYTHING.BEAUTIFUL FISH.
1-2 of 2 testimonials