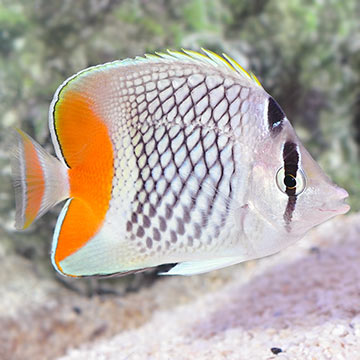 The Pearlscale Butterflyfish is another beautiful example why marine Butterflyfish remain perennial favorites among hobbyists. This gorgeous fish boosts visual interest with lively color and eye-catching, graphic patterning. The addition of this stunning specimen in your Fish Only With Live Rock (FOWLR) is sure to make your heart flutter.

Write a Testimonial | Ask Customer Service
Aidan C Hopkinton , MA
Just got this fish and I really love it! It is very pretty and is always swimming around and happens to be best buddies with my yellow tang. I got the large and it started eating frozen brine shrimp on the first day. I really enjoy this fish and I keep him with some other smallish predators like a snowflake moray, marine betta, and a dwarf zebra lion fish in a 60 gallon aquarium. I highly recommend these fish because they are beautiful and easy to care for. Just make sure they have at least 1 ledge and one crevice to sleep and they will get along perfectly.
Harold L Carnegie , NY
I began my third tank and first put my clowns in. The Pearlscale was the second fish and does outstanding. Always busy and not aggresive.Make sure you have some ledges for them to sleep under. Look for one very active at the FS and they work out.It began eating the afternoon I brought it home.Also comes to the glass. Great addition. This is my butterfly tank. You can't go wront. Keep the tank with current and clean.
Harold L Carnegie , PA
An outstanding fish. I have only Butterfly Fish in a new tank. It is very calm and is enjoying to watch due to moving all of the time. Moves slowly and is very calm. Eats well and finds a spot for night rest. If you have a calm tank this is an outstanding fish. The cost is never high on this fish.
1-3 of 3 testimonials