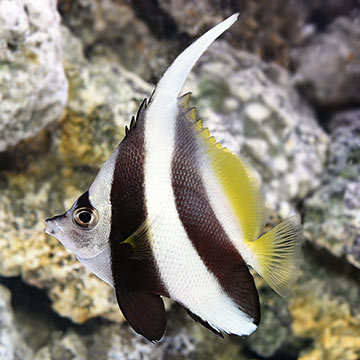 The Heniochus Black & White Butterflyfish, also known as Longfin Bannerfish, has a very elongated white dorsal filament. It has a base color of white with two wide black stripes. The soft dorsal and caudal fins are yellow, and there are black marks above the eyes. Members of the Heniochus genera are often called Bannerfish instead of Butterflyfish.

The Heniochus Black & White Butterflyfish may reside in a 125 gallon or larger aquarium with other peaceful fish and others of the same species, if all were introduced into the tank at the same time. When swimming, the elongated white dorsal filament moves like a banner in the wind.

This species of Heniochus is not considered reef safe. It prefers a diet of small meaty foods and herbivore preparations.

Write a Testimonial | Ask Customer Service
Roger K Silver Spring , MD
This is a very easy fish to maintain. Shy at first with more aggressive feeders, but became a viable member of a very active community within 3-4 days (tangs, triggers, lion, etc.) Thrives on Formula One & Two frozen Algae foods.
David B Newport Coast , CA
This fish is awesome and my favorite in my tank he is peaceful and is a great eater although his acclimation time took about 3 hrs. after that he was very active and friendly to other fish him and my maroon clownfish are best buds. I would recommend this fish to anyone with a fowlr tank with inverts
Harold L Carnegie , PA
This is a very nice fish for the tank. I have a new tank now with Butterfly Fish only and it fits well in the community. Romes all of the time and we enjoy watching movement with the others. They will group with other fish most of the time.It also eats very well from the first day on. Before you buy as in any fish, watch it to see how active it is.
Jen Yearout Bluefield , WV
Highly encourage drip acclimating this beautiful fish. we did and he was so active and happy joining our tank. Not shy, and ate like a pig. Couldn't be happier! Read and follow all acclimation instructions, butterfly fish are sensitive, even though heniochus is labeled easy acclimate like you would a shrimp and you will be glad you did! Even prettier than the picture
1-4 of 4 testimonials