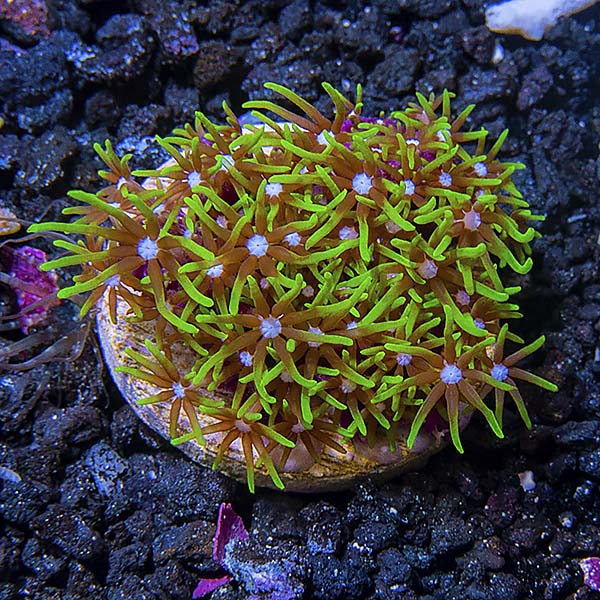 Starburst Polyps have a bright purple base with green polyps. They have distinctive eight-leaved tentacles on each polyp. They are colonial animals with several individual polyps attached to a hard surface. The parent colony of these coral frags was originally collected in Jakarta, Indonesia, was maintained in house, and then quarantined and given a health inspection before being propagated.

Accurately described as an encrusting coral, Starburst Polyps rapidly grow over adjacent rockwork, coral, or even the glass of an established reef aquarium. They are a peaceful coral armed with the defensive capability of being able to retract or deflate each of their polyps in response to predation. They will not harm other corals that are placed close to their colony, but are susceptible to being damaged by any aggressive corals in the reef aquarium. They are easy to maintain in the reef aquarium and make an excellent candidate for the beginning through expert reef aquarist. They require a medium to high light level combined with a medium to strong water movement within the aquarium. For continued good health, they will also require the addition of iodine and other trace elements to the water.

These polyps are attached to a square aragonite plug and can be easily placed in holes or between the rockwork of the reef aquarium.