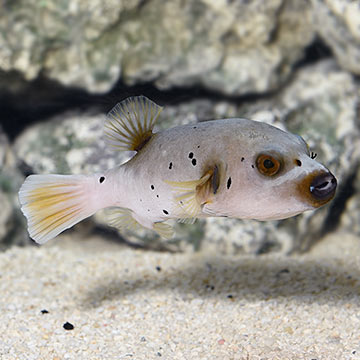 The Arothron Dog Face Puffer, also known as the Blackspotted Puffer, gets its name from its resemblance to canines. It changes appearance during different stages of life. While in the gray phase, it is gray with black markings around the mouth, eyes, and dorsal fin. The pectoral fins have a yellow appearance. The half-yellow phase is denoted by a yellow underbelly and dark gray overcoat, while the face looks similar to the gray phase. It may also have black spots over the body, which may be gray or yellow. It very rarely changes phases while living in an aquarium.

A 100 gallon or larger, fish-only, carnivorous aquarium is suitable. The Arothron Dog Face Puffer makes a great addition to these tanks with its great personality and unusual appearance. It will eat invertebrates found in a reef tank. It tolerates other Puffers that are not more aggressive than itself. It is shy at first, and becomes alarmed when in a net, therefore, use a container to transfer it.

The Arothron Dog Face Puffer needs a varied diet of meaty foods including; squid, krill, clams, and hard shelled shrimp to help wear down their ever growing teeth.

Write a Testimonial | Ask Customer Service
Kim P Russellville , AR
This is my favorite puffer! He acts just like a puppy when he sees me come home or awake in the morning. He greets me like a dolphin does with his nose and eyes bobbing up out of the water, his fins moving quickly, and his tail rolled to one side of his body in excitement! He even lets me pet the top of his head at this time, but I don't touch him a lot for this hurts his protective coat. He gets along with a lot of other fish, as long as they are gentle. Stress is bad for this fish, he changes colors in anger and won't eat for a while. When he's really stressed, he puffs up. He's easy to care for and very loving.
Christen S Buffalo , NY
Our puffer was the best addition to the tank! He has so much personality; he swims right up to the glass and parades in front of us! He also eats right out of our hands (his favorite - krill). He's always the talk of our guests!
Vincent S Foster City , CA
Cool looking fish who attracts people's attention. Eats like a pig & gets large rather quickly. Other larger fish will not eat as their flesh is poisonous. Caution as when some die they seem to release a toxin in the water as they inflate themselves when they die.
Big L Brooklyn , NY
I have 3 Puffers: 1 Stars and Stripes and 2 Dogs. Love them. The best fish to have.
David C Lake Como , NJ
The best puffer I have ever owned by far! I have had him for the past 4 years. He gets along with all of my other fish even though he is much larger. Mine is very colorful with a solid yellow lower half and he will pretty much eat anything. He is messy as with all puffers but has so much character. He does a little dance up and down on the glass, comes up close when visitors walk in, and presses his "beak" on the glass and just chugs around until he is tired, at which time he will find a place to prop himself and fish watch. He will take shots at small inverts so do not be mistaken by the cuteness/kindness. I have found that keeping the fighting conch works best. They remain buried thru most of the day and their shell protects them extremely well from pick-off attempts.
Jay P Tampa , FL
A great addition to our tank! He is still just a baby, but eats everything. He has tons of personality and gets along great with our Trigger and Saddle Puffer. When we stand in front of the tank he swims over, probably thinking that he's going to get something to eat!
Brian S Brooklyn , NY
This is a very hardy fish. Very personal and greedy. They will eat all day long.
Rockime D East Orange , NJ
So far so good loving my fat baby he/she comes to the glass with the eyes moving around checking things out. Getting use to me already it's been 2days. To funny and very aware. Can't stop laughing when I see him/her. O always eating anything.
1-8 of 8 testimonials