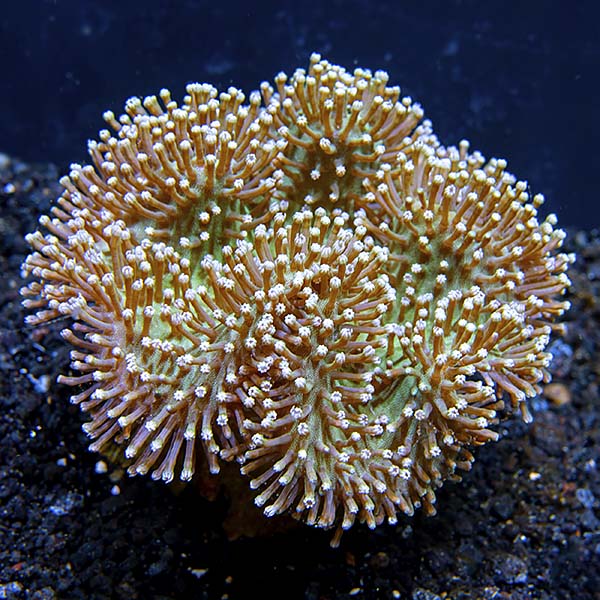 The Toadstool Mushroom Leather Coral is referred to as Sarcophyton Coral, Mushroom, Leather, or Trough Corals. They are found in various shades of brown, tan or green, with white or gold polyps. It is difficult to identify many species because they all have the similar appearance of a mushroom or toadstool, each with a distinct stalk and capitulum (cap). As they grow older, they develop a folded appearance.

The Toadstool Mushroom Leather Corals are relatively peaceful, but adequate space should be provided between them and other corals in the reef aquarium. Some can produce toxins which are harmful to other reef inhabitants. The more plain Sarcophyton Leather Corals from Idonesia are easy to maintain in the reef aquarium and make an excellent coral for the beginning through expert reef aquarist. The colored Sarcophyton Leather Corals from Tonga are much more difficult to ship and maintain, and are only for expert aquarists. Toadstool Mushroom Leather Corals require medium to high lighting combined with medium to strong water movement. For continued good health, they will also require the addition of iodine, strontium, and other trace elements to the water.

Culturing by the experienced hobbyist is often accomplished by cutting off a portion of the Coral's crown and attaching that piece to live rock or placing it in the sandy bottom of the reef aquarium.

The symbiotic algae zooxanthellae hosted within its body provides the majority of its nutritional needs from the light driven process of photosynthesis. It will also benefit from additional food such as micro-plankton, baby brine shrimp, or foods designed for filter feeding invertebrates.

It is normally shipped attached to a small piece of live rock or rubble.

Write a Testimonial | Ask Customer Service
Kathy Smith Zeeland , MI
I have a toadstool and I love it. It is very easy to care for the only thing I have done is put it in my tank at the bottom and it seems to love it there. It has grown a lot since I have added it. I recommend it to anyone that is starting out - it has been one of the easiest things to take care of.
1-1 of 1 testimonials