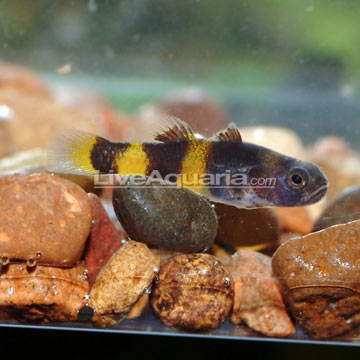 The Bumblebee Goby is a small, relatively peaceful fish that does not tolerate intrusion into its territory. It features a long thin body that is black with yellow stripes.

The ideal set-up is an aquarium with brackish water and plenty of plants and rocks providing the Gobies with ample hiding places. Although they do well in a community setting, they will thrive the best in the company of only their own species.

Even though they live in the brackish water, the addition of freshwater will induce spawning. The female will lay the eggs in the substrate beneath a root or rock where the male will fertilize them. After fertilization, the male will guard the eggs for approximately four days until the fry become waterborne.

The Bumblebee Goby requires a diet rich in small, live foods such as tubifex worms, bloodworms, brine shrimp and daphnia.

Write a Testimonial | Ask Customer Service
Fishy Bumbles Salem , MA
I have kept Bumble Bee Gobies for awhile. They are very interesting to watch since they have such a large mouth for their body size. I have plenty of caves in my tank, so that way my Gobies can hide if they feel scared.
Deanna
Bumble Bee Gobies are good fish for a brackish community tank. They add activity and color (not really colorful but very pretty). They are peaceful and need other Bumble Bee Gobies to be happy. They need small caves and other places to hide. They love brine shrimp, baby brine shrimp, tubifex-worms, blood-worms, and all meaty foods. Wonderful fish for a brackish community. I have mine with Mollies.
H Warner Redlands , CA
I have six Bumble Bee Gobies in a slightly brackish (2 tbs salt per gallon) aquarium along with seven Boesemani Rainbowfish. My tank is heavily planted, with some natural coral and shells, and the water is hard with a high pH (7.8). My bumblebees are thriving under these conditions. I read that bumblebees are territorial loners, and so I provided them with plenty of hiding places; however, I have found that they like company of their own species. I would keep them in a group of at least four bumblebees. The only difficult thing about raising this fish is that they will only accept live foods (they will not eat flake or even frozen foods). Despite their small size, they are very entertaining and welcome additions to my community aquarium.
1-3 of 3 testimonials