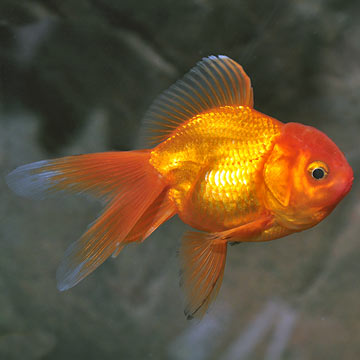 Red Oranda is one of several varieties of what is commonly known as the Goldfish; Carassius auratus auratus. Originally from parts of Asia, Japan, and China, Goldfish now enjoy worldwide distribution due to controlled breeding programs. The Red Oranda is a metallic-scaled fish. Resembling the Veil Tail varieties, the Red Oranda's distinction is in its color and the "hood" that covers its head. In the case of the Red Oranda, the entire body and hood are a bright red or orangish-red. All Goldfish are members of the carp group and generally quite hardy.

The Red Oranda will do well in a tank of 30 gallons of water or more with a fine gravel bottom and hardy, cold water plants, as well as backyard garden ponds of 180 gallons or more. Goldfish are diggers and will scatter the fine sand onto leaves, injuring thin and less hardy plants. Roots and well-rounded river rocks are appreciated.

There appears to be a definite courtship ritual when Goldfish breed. Breeding often results in up to 1,000 eggs, with fry hatching in five to six days. They should be fed small pieces of live or prepared foods designed for egg-laying fish.

Goldfish are omnivorous, and will eat all types of dried and live foods. Limit protein, however, to 30% of the diet. A Goldfish flake or pellet food will provide these fish with the proper nutrition.

Write a Testimonial | Ask Customer Service
Kristine B Boring , OR
I just got my Red Oranda Goldfish named Gobbles and I absolutely love him. He has such a great personality and I could spend all day watching him zoom around his tank. So far I have found him very easy to care for, but I do have a few reccomended items. The first thing I'd recommend is to make sure you have an aquarium test kit to check ammonia level's as these fish create more waste then most. I also recommend sinking pellets for food instead of the flakes. Naturally all recomended feeding and tank cleaning schedules should also be followed. Other then that you can sit back, relax, and watch your new fish entertain you for literally years to come!
1-1 of 1 testimonials