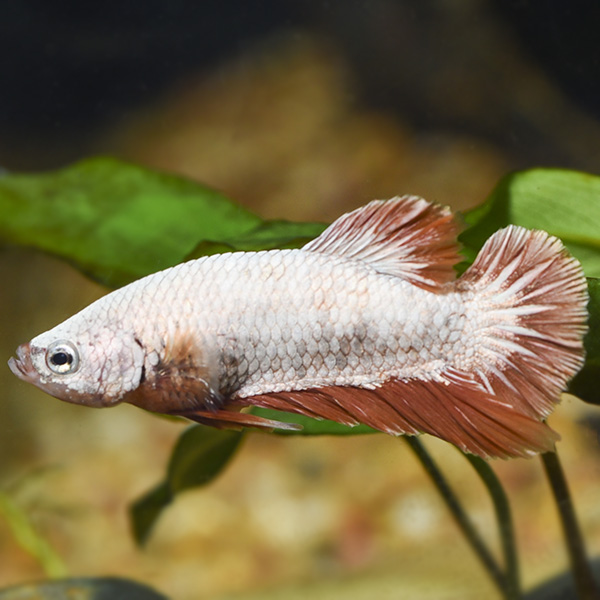 Dragon Scale Orange Halfmoon Plakat Betta are part of the Betta splendens genus and species that is popular among home aquarists around the world. Because of careful breeding the colorations and tail size and tail formation of this species is quite expansive and adds to their prized specimen status.

With a cylindrical body that is typical among Plakats, they have stockier white bodies with no curves. The white body color migrates beyond the base of their brightly colored orange fins. With an orange tail fin shaped like a halfmoon and their sturdy dorsal fins with noticeable rays, these freshwater fish live up to their superstar status. Adding to their dramatic look is the presence of dragon scales that are slightly larger than normal scales and contain darker edges that give them a dragon-like appearance. Striking features individually, they add up to a showstopping specimen for your freshwater aquarium. Although female Betta are also eye-catching, LiveAquaria® is offering the larger male option.

The Dragon Scale Orange Halfmoon Plakat Betta shares the same care requirements as other Betta splendens varieties. As such, only one male Betta should be kept in an aquarium. In their natural environment, Bettas live in heavily planted slow or standing bodies of water, such as floodplains, canals, and rice patties so do not require a large tank environment. Care should be taken not to house Bettas in jars or bowls even though their length at maturity is about 2.5”. With an easy care level, even beginning hobbyists can achieve success keeping this beautiful species of freshwater fish.

This specific Halfmoon Betta is a carnivore and should be offered a varied diet including quality flake foods, pelleted Betta food, and frozen or freeze-dried bloodworms and brine shrimp.