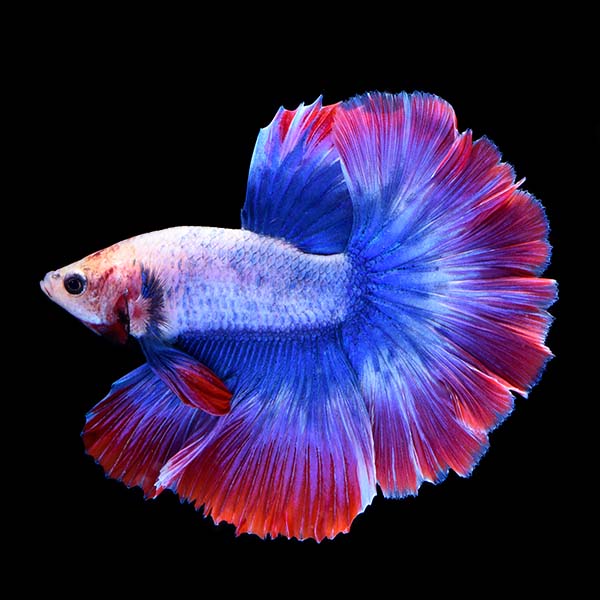 The male Lakeside Sunset Betta features a lovely layered red, white, and blue color pattern that creates a beautiful "banding" effect that forms a rough "bulls-eye" pattern. This multi-tone color pattern is sure to strike a patriotic chord among many freshwater aquarium hobbyist! In addition to its distinct coloration, this variety of Betta splendens has been selectively bred to produce a distinct Half Moon tail. A Halfmoon Betta demonstrates highly ornate fins with the caudal (tail) fin forming a semicircle or "Half Moon" shape with a caudal spread of at least 180 degrees.

The Lakeside Sunset Betta shares the same care requirements as other Betta splendens varieties. As such, only one male Betta should be kept in an aquarium. However, the smaller, shorter-finned females may be housed together with caution. If kept in a community aquarium, the Lakeside Sunset Betta should be housed with peaceful fish that will not nip at the Betta's glorious, flowing fins.

The ideal environment for the Lakeside Sunset Betta is a filtered and heated aquarium that maintains a stable temperature between 75° and 86°F. For best care, the male Lakeside Sunset Betta should be kept singularly or with suitable, peaceful tank mates in aquariums of at least 4 gallons in size. In addition, the Lakeside Sunset Betta also prefers having access to a variety of hiding places where it can rest or seek shelter Therefore, an appropriately-sized aquarium with proper filtration, heating, and aquascaping is essential for this otherwise hardy and colorful freshwater aquarium fish.

Bettas are relatively easy to breed in the home aquarium by the dedicated aquarium hobbyist. For breeding purposes, a male and female pair can be temporarily housed together. Once the female lays her eggs, the eggs are placed inside a bubble nest and tended to by the male Betta. Fry appear in about 24 hours and must initially be fed very fine food, such as crushed or powdered fish food flakes and newly hatched brine shrimp. Fry will also eagerly accept finely chopped hard-boiled egg yolk.

The Lakeside Sunset Betta is a carnivore and should be offered a varied diet including quality flake foods, pelleted Betta food, and frozen or freeze-dried Bloodworms and Brine Shrimp.