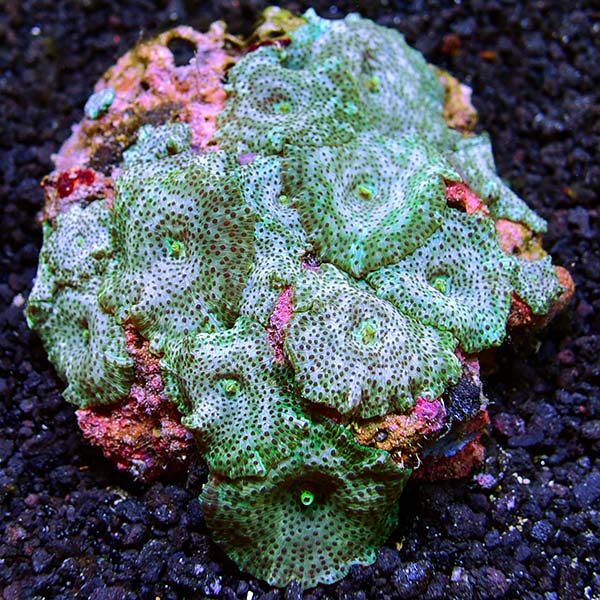 The Actinodiscus Mushrooms are also referred to as Mushroom Anemones and Disc Anemones. They were previously in a genus called Discosoma. These corals display a wide variety of colors, textures, and patterns. Some are solid colors, whereas, others are striped or spotted. The taxonomy of the various species is in a state of flux, and will probably continue to change.

They are hardy and moderately easy to maintain, and under the right conditions, will multiply and spread very rapidly. In general, they need a medium light level, and should be placed lower in the tank if the light intensity is high. The Actinodiscus Mushrooms prefer a low to medium water flow within the aquarium, although different species may have different requirements. They are semi-aggressive and require adequate space between themselves and other corals and sessile invertebrates. Each ships as several individual mushrooms attached to one rock.

It ships as several individual mushrooms of one color attached to one rock.

Write a Testimonial | Ask Customer Service
Zach Sendukas Houston , TX
I just got the mushrooms the other day, and I drip acclimated them into my 29 gallon biocube. They are simple. Yet close inspection reveals subtle beauties: Deep greens, purple dimples, rough skin, undulating in the current. A beautiful light green feather duster was hitchhiking on the back of the rock.
1-1 of 1 testimonials