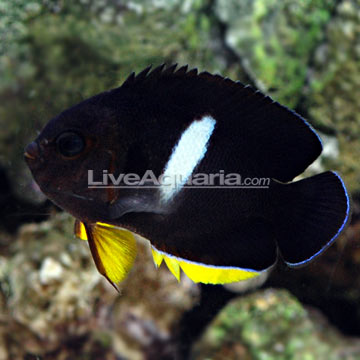 Provide a 70 gallon or larger tank for the Tibicen Angelfish. It should have large amounts of live rock for hiding and grazing. It may nip at stony and soft corals (sessile invertebrates) and clam mantles. It will also feed on filamentous algae and diatoms.

It is hermaphroditic, very difficult to breed in an aquarium, and has no distinguishable differences in color between male to female.

Write a Testimonial | Ask Customer Service
Chad V Peoria , AZ
This fish is wonderful. He can be quite shy but is full of life after a few days. I have him housed with a surgeon fish, tomato clown, two green chromis and two peppermint shrimp. He gets along with all of them.
Harjit B NJ
Beautiful fish. I have it in a 125g. The only problem is that it picks on stony and soft corals.
1-2 of 2 testimonials