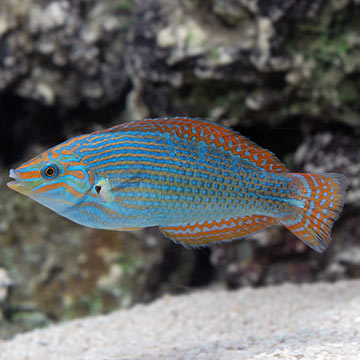 Put on a pair of shades before viewing this fabulous wrasse, because the Male Vrolik's Wrasse is a true razzle-dazzler. Neon red stripes pop against the iridescent blue and green body coloration, giving the Vrolik's Wrasse a commanding presence. Under the "right" lighting conditions, the Vrolik's Wrasse appears to glow golden-yellow, imparting a fantastic unexpected visual effect. Halichoeres chrysotaenia, while appearing similar to Halichoeres melanurus, can be differentiated by its spotted caudal fin, whereas H. melanurus has lines on its caudal fin that form a single black spot when compressed.

The natural range of the Vrolik's Wrasse is concentrated in the Indian Ocean including the Maldives and Sri Lanka with populations in Myanmar to western Thailand and Indonesia. Though the Vrolik's Wrasse is a reef-associated species, they are typically found in shallow weedy areas of rocky shorelines and not in areas with rich coral growth.

Write a Testimonial | Ask Customer Service
Jason C Allentown , PA
An amazing fish all around. Very vibrant, unique coloration and an awesome personality to match. Constantly picking at the live rock and sand, and keeps my reef pest free. Acclimated relatively quickly to my tank. Ate frozen food right out of the bag. When available, grab one, you won't be disappointed.
Barret R San Antonio , TX
I received this wrasse in great condition went under the sand for the first night and the second night he was out and ate frozen brine shrimp.
Doug C San Diego , CA
I have had my Vrolik's wrasse for over 2 years. He disappeared into the sand the first 5 days I had him and I began to worry. On day 6 he emerged from the sand and has been healthy and active ever since. Last year he acquired a taste for flatworms and cleaned the tank out! At feeding times he lets the mystery wrasse know who's boss but other wise is completely peaceful with all the other fish in the tank including a sailfin tang, eibli angel, ocellaris clown, azure damsel and starry blenny
Gabriel W York , PA
This an amazing fish! The picture does no justice to his coloration. He rarely bothers my clean up crew and eats flatworms and bristleworms. He is not at all aggressive to any of my fish and was definitely worth the purchase! I highly recommend him!
1-4 of 4 testimonials