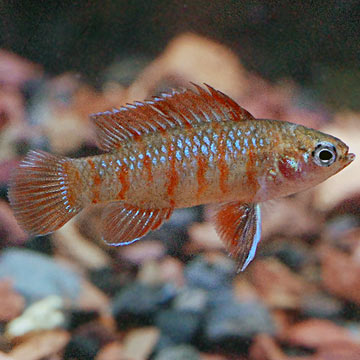 The Scarlet Gem Badis is a shy, small freshwater fish considered one of the more underrated species in the hobby. Its brilliant coloration and unique personality reminiscent of dwarf cichlids make the Scarlet Gem Badis quite an interesting species to study.

Not a candidate for the community aquarium, the shy Scarlet Gem Badis is best kept in species-only aquariums or alongside small anabantoids such as Liquorice Gouramis. Success has also been noted keeping with small shoals of Dwarf Spotted Rasboras, as long as you ensure enough food reaches your Scarlet Gem Badis.

Diet should consist of small live and frozen foods like bloodworm, daphnia, Cyclops and microworms. The Scarlet Gem Badis is a finicky eater, so observe carefully to ensure that what you offer is being eaten - and adjust diet accordingly.

Write a Testimonial | Ask Customer Service
Kurt D Kansas City , MO
Great price, arrived healthy and colorful, would buy again. 5*
Skylar M Atascadero , CA
these little fish are awesome i have three males im looking to get a couple females also they are very curious fish and highly active i have them in a 10 gallon with 2 red cherry shrimp not a whole lot of plants but i am looking to make it a show tank so i will put alot more plants in a way great fish easy care
1-2 of 2 testimonials