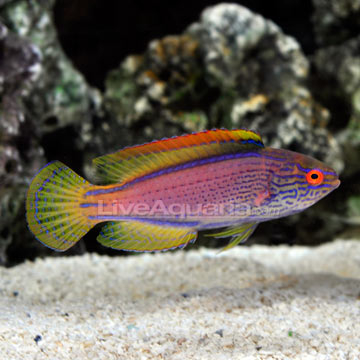 The Lineatus Fairy Wrasse is a very peaceful, active fish that will bring both color and activity to a fish-only or reef aquarium of 90 gallons or larger. They will not harm corals or invertebrates making them the ideal candidate for the reef aquarium. These wrasse like to jump, so a tight fitting canopy is recommended.

Write a Testimonial | Ask Customer Service
Candy V. Washburn , WI
Bold and Active. Loves Brine Shrimp. Incredible colors. I am SO GLAD I invested in this fish!
David Pruitt Lexington , NC
This is one of the most incredible fish I have acquired in the hobby. They are extremely curious and not nearly as shy as other fairy wrasses. They are extremely docile. The key to success with this fish is feeding him well and frequently. If possible at least two times a day is preferred. They will eat as much food as you present to them. They have an extremely high metabolism (not unlike zebrasomas). Mine loves mysid shrimp, or any meaty food (even squid). They are extremely hardy if fed well. I highly recommend it for any reef tank.
Scott Fishel North Babylon , NY
A very friendly fish that does not hide in rocks. It is an easy eater - mine eats mysis shrimp.
RANDY B WEST JORDAN , UT
I received my Wrasse yesterday. My fish is really beautiful with all different colors. Is not shy at all. Very happy I picked him.
1-4 of 4 testimonials