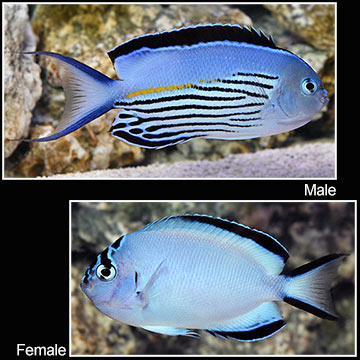 Watanabe's Angelfish are best housed as a male-female pair in a 125-gallon or larger tank, and are ideal candidates for the deep-water reef aquarium. Acclimation will be facilitated by a dimly-lit tank. The tank should have multiple hiding places and live rock for grazing. Do not keep two males in the same tank as fighting will ensue.

Write a Testimonial | Ask Customer Service
Janice L Fall Church , VA
Wow! The large Watanabei from Live Aquaria that I just got is HUGE!! A very beautiful, healthy and hardy specimen. A great eater too. Its color is absolutely striking and it's reef safe. I highly recommend this fish for any large mixed reef. I must also mention that the service I've gotten from customer service all the way to the coral farm has been fantastic. Drs. Foster and Smith really cares for their livestock. My personal experience is that they care about making their customers very happy as well. I've had all my questions and concerns addressed by professional, courteous, patient and very knowledgeable staff. Thank you all for making this a smooth transaction.
1-1 of 1 testimonials