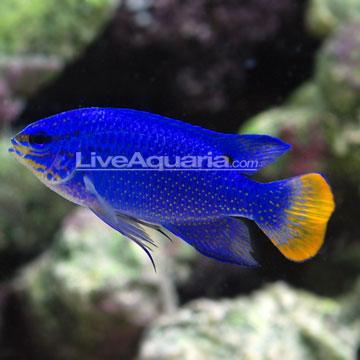 The Orangetail Blue Damselfish is somewhat aggressive, so its housing should be able to easily accommodate multiple specimens. It is a good fish for beginners, and makes an ideal companion fish for a saltwater tank of over 30 gallons, and as a great companion for reefs and invertebrates. As the fish matures it may become aggressive, causing problems with the selection of other species to be added to the aquarium. If keeping with other damselfish, provide multiple hiding places to break up territories and decrease aggression.

The Orangetail Blue Damselfish diet should consist of flaked and frozen foods, and herbivore preparations.

Write a Testimonial | Ask Customer Service
Ralph Nilssen Kent , WA
Incredible, beautiful fish. However, the most pugnacious fish you will ever own!
1-1 of 1 testimonials