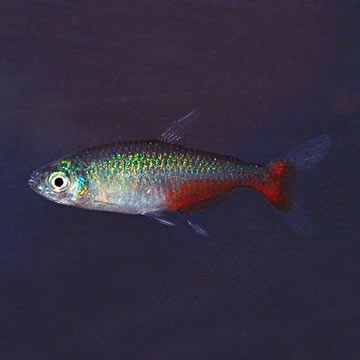 The Green Fire Tetra comes from the clear waters of South America. This species is a translucent green color with a black patch on the dorsal fin, and a red/orange underbelly. This species does best in small groups of at least six or more.

In at least a 10-gallon aquarium, plants, rocks, and some driftwood should be used to give this species hiding places and security. They require a steady slightly acidic pH and constant temperature. They are mid-level swimming fish so taller plants are ideal.

In the aquarium, the white tips on the dorsal, pelvic, and pectoral fins can identify the male. The female lays a relatively small number of eggs, which hatch in about 24 hours after fertilization. This can happen frequently in an aquarium when large numbers of Green Fire Tetras are present. To avoid losing the fry, a separate "breeding tank" should be used, and the adults removed after spawning to prevent them from eating there offspring.

The Green Fire Tetra will accept many small foods such as brine shrimp or daphnia, freeze dried bloodworms and tubifex, micro pellet food, and a high quality flake food.

Write a Testimonial | Ask Customer Service
Charles Y Delanco , NJ
Green tetras are beautiful (IF) kept in soft acidic water. I have seen them for sale in pet stores kept in hard ph 7+ they looked gray with little red (but)when put in the right water they turned beautiful.They are hardy peasful fish.
1-1 of 1 testimonials