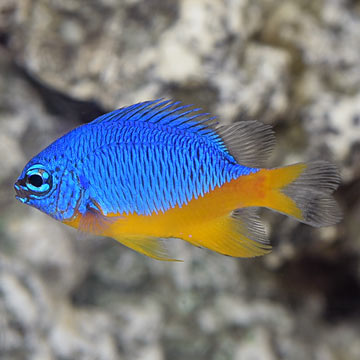 A 30 gallon aquarium or larger with plenty of rockwork and décor is ideal. Because it can tolerate substandard water parameters, it is a popular fish among beginning hobbyists. A small group of juvenile Azure Damsels will add color and drama to most marine aquariums. Maintain this species with other semi-aggressive fish, as they can become territorial as they mature. In larger reef aquariums, this is normally not a problem if plenty of hiding places are provided.

The Azure Damselfish diet should consist of quality flake foods, frozen meaty foods such as brine or mysis shrimp and occasionally dried seaweed offered on a feeding clip.

Write a Testimonial | Ask Customer Service
Kyle Valparaiso , IN
The Azure Damselfish is a rather striking addition to the reef aquarium. Hardy, active, and attention-getting, this fish is great for a burst of color and movement. Temperament and behavior seem comparable to the Yellowtail Damselfish. However, for just a few dollars more, I must recommend the Azure Damselfish over its close cousin due to its more attractive coloration.
Dana C Traverse City , MI
Electric pop of color in my tank. I got three for my semi agressive 135 gallon aquarium. They hold their own and are so gorgeous in the tankl I love the maize and blue! You don't have to be a Michigan fan to love how these guys light up an aquarium. Most of my fish are much larger than they, so no probles with agression yet
Heather Tuscaloosa Tuscaloosa , AL
I love these fish! They aren't aggressive and are so vivid in color. They eat all prepared food and are very hardy. I highly recommend them.
1-3 of 3 testimonials